After much anticipation about the possibility of unrest after Election Day, things have been overwhelmingly peaceful so far in Long Beach—with about 70 people turning out for a small rally outside City Hall Wednesday afternoon.

A police helicopter sometimes swooped overhead and officers monitored the gathering from afar as speakers addressed the group, which focused on a message of unity and reinvesting in the community after a divisive election. They also celebrated victories like the passage of county Measure J, which redirects funding from law enforcement to mental health services and jail diversion.

“Today is about showing up to defend our people and demand democracy,” said James Suazo, director of Long Beach Forward.

The organizations had been in communication for weeks about a possible protest in case Trump tried to prematurely declare victory, which he did Tuesday night. The protest organizers suspected Trump would do that regardless of the vote count.

“For me, this was further validation that many of us have been feeling, that the presidency is veering into authoritarianism,” Suazo said.

The group gathered at City Hall starting at 1 p.m., where several speakers talked to the crowd about issues like divestment from police, investment in housing and healthcare and a path forward for marginalized communities in the wake of the election.

“I’m suspect of White voters in America,” said BLM Long Beach organizer Audrena Redmond. ” … Regardless of who wins, we still have a lot of work to do.” 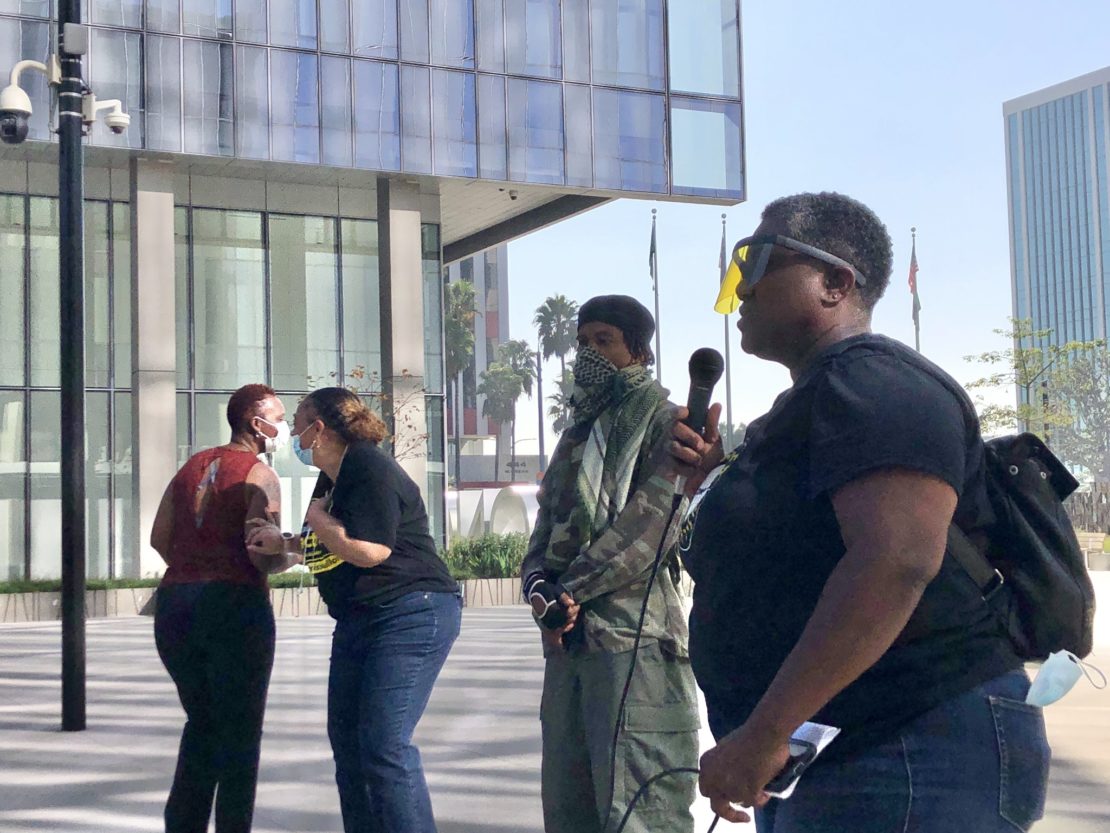 Rumors about planned protests have had Downtown Long Beach business owners and residents on alert leading up to the election, with many fearing there could be large demonstrations followed by looting, like what happened on May 31.

Businesses started boarding up their buildings as early as Saturday in anticipation of civil unrest. The Long Beach Police Department spoke to business owners Monday night to tell them the department is on a level-two tactical alert, which means officers are working 12-hour shifts and time off is limited in anticipation of any large protests.

“We’re here to make sure everyone’s voices are heard and to make sure our community is safe,” said Arantxa Chavarria, spokeswoman for the department.

Organizers, too, took precautions. In an effort to keep protesters safe and prevent outside groups from sowing chaos or sparking violence, Suazo said they established security teams and a security plan for today’s event.

“People will come and we want to be clear about that our intentions are protecting our vulnerable communities and protecting democracy,” Suazo said.

Back to News & Updates

Long Beach Forward is excited to announce the launch of …

Will you join us?

We believe race and income shouldn’t determine anyone’s future in Long Beach. In our community, everyone should be safe, connected, and healthy.

Be part of creating a healthy Long Beach with low-income communities of color. Let’s build community knowledge, leadership, and power!

Donate to help ensure race and income do not determine one’s future in Long Beach!